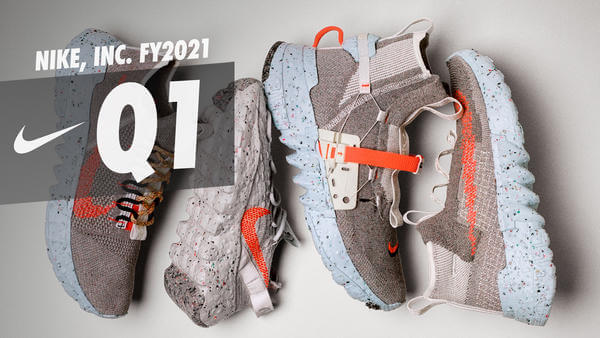 Typically, a company built on growth losing a percentage would cause worry. I’ve been stating since 2015 that Nike’s move towards DTC would pay dividends. That’s not a hard thing to predict. However, what wasn’t in the cards was a pandemic that closed stores in Q4 heading into Nike’s Q1. As stores reopened, the industry resorted to analyzing POS data and in doing so they thought Nike’s momentum would be slowed considerably. I discussed the reality in a post 12 days prior to Nike’s report, by giving the number of sales I attained in resale in 1 month:

Nike’s 1% loss this past quarter was still revenue of 10.6 billion. Obviously not a reason to worry. It was a reason to celebrate. Wall Street predicted Nike would only have revenues of 9 Billion. Nike lost a percentage in revenue and still exceeded expectations by over a billion dollars. On this site, I utilize my micro set of data to make predictions and analysis. If you clicked through on the link above, you saw my 1 month sales average. What I have to state is that prior to COVID-19 resale was trending down. I don’t want to get too far ahead, so let me move slower. In March I wrote that:

Nike’s decision to decrease accounts and control the market in a strategic fashion has contributed to a machine that is marching towards 45 Billion in the next few years…nothing disrupts Nike’s momentum.

Nothing, not a pandemic brought on by COVID-19, is a match for the fervor around Nike drops. As quarantines came to an end, and even during the quarantine, zoom were buying. Instead of focusing on Nike, it’s important to position this discussion around an industry that is booming, or appears to be booming, resale.

If you follow this site, you know that I’ve found that resale is a great indicator of brand heat. Resale can also be utilized to look at how this “business” is shifting and changing on a daily basis. The only other market where you can look at resale as a parallel to the greater market are video games.  The feedback from resale is more immediate than quarterly POS data; but this is only the case when the data comes from a place that isn’t focused on hyped sneaker releases. My resale is an extension of store visits. I visit stores to research and write posts about marketing and merchandising. As a result, I’m in the stores when markdowns take place and when items become “hot”. It’s the reason, a few years ago, I recognized the rise of Vans as general release Vans hit resale. Business Insider and other sites tend to focus on resale and hype, when the reality is more resale is taking place on low end and clearance items. The sexy part of resale is looking at kids using bots to pick up six pair of Dior 1s, but that does very little for businesses attempting to analyze data and sales patterns.

Hype is an anomaly and to be honest sneakers like Travis Scott’s or Ben and Jerry Dunks have such limited quantities, looking to those releases creates outliers that fail to actually create the micro to macro comparison needed to make predictions or discuss sneaker business.

One thing is for certain, Nike’s dominance is clear and the quarantine and months since businesses have reopened have seen some of the biggest numbers for both resellers and retail. Remember, I wrote earlier this year and in my last book that resale was trending down. COVID-19 has delivered an interesting situation for retail and for resale. Things are good right now, but I’ve seen a similar trend in 2011-2012. That year I did over 550,000 in resale. The spike happened because Amazon began accepting more Seller Central Marketplace accounts. That’s a different discussion. This time around StockX and GOAT have helped to create an easier path to resale, which created a spike, and has contributed to investment dollars flying all around resale. The problem is these investors don’t have a real measuring stick for what’s actually happening. On the surface everything looks great. It would appear that Nike’s growth is a rising tide. It’s not lifting all boats. There are some interesting things taking shape in resale and over the years when things happen in resale (not hyped resale, which isn’t that big) they happen in stores and to the industry. Nike’s CDA is shaping retail and resale and a discussion should be taking place, but it isn’t.

10 Realities of Resale Being Shaped by Nike’s CDA

Sorry about this long article. I’m stopping now. I was about to place charts showing my resale of other brands last year compared to this year. I was going to dive into the fact that adidas UltraBoost are sitting on sale tables at 69.99. I was going to discuss more, but that would be another book.